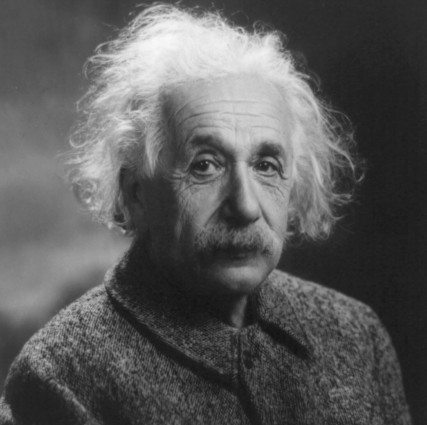 Wrote four papers that began an entirely new era in physics (at the age of 26). Every field of science has been touched by his work: biology, nanotechnology, cosmology. Even the reason the sky is blue is related to theories established by Einstein!

Developed the equation E=mc2. This means that the mass of something (m) is directly related to how much energy it contains (E) and the speed of light (c). If you increase your energy by running, your mass decreases.

Established the "speed limit of the universe": nothing can go faster than light.

Won the Nobel Prize in Physics in 1921 for the photoelectric effect (the interaction of light with metals and electrons). This helped scientists understand the true behavior of light — light waves and photons ("chunks" of light) are both correct at the same time! While it seems impossible, many experiments have proved that these contradictory ideas are true.

Wrote to President Franklin D. Roosevelt (with fellow scientist, Leo Szilard) urging the U.S. to develop atomic bombs to counteract bomb research that was already going on in Germany. This helped start the Manhattan Project to develop the American atomic bomb. After the U.S. used its atomic bomb in World War II, Einstein deeply regretted his involvement. He spoke out against the use of atomic bombs and the arms race for the remainder of his life. Today, there are many international organizations for scientists to unify against nuclear weapons.

Too Far Beyond His Years. Einstein's work was so revolutionary that it took a lot of work to convince other scientists that he was right. Many of his ideas seemed like science fiction, but Einstein worked hard to back everything up with math. Eventually, the whole scientific community supported Einstein.

Doubting Yourself. Einstein himself doubted some of the ideas that his mathematical work generated, and was willing to give up his theories if experiments proved them wrong. One of these was the "cosmological constant" that described the evolution of the universe. Ten years after he wrote this paper, an astronomer published conflicting data. He accepted this new theory. However, Einstein's original ideas were proven correct in 1998.

President Einstein? While he was raised Jewish, Einstein did not believe in a god and considered himself agnostic and pantheistic (the universe and nature itself is contains all spirituality). He maintained a connection to Jewish culture throughout his life. He was asked to be the president of Israel but declined.

He was born in Germany and studied physics in Switzerland. When World War II began, Einstien renounced his German citizenship and immigrated to the United States. He was a professor at Princeton until his death.

Mozart was his favorite composer, and music was important to Einstein throughout his life. He was a brilliant violinist as a child.

Einstein's brain was studied extensively after his death (but without his family's permission). Doctors learned that he had a number of abnormalities that likely made it easier for him to do math and combine and analyze information, and that the two halves of his brain communicated better. The brain also went on a tour of the United States!