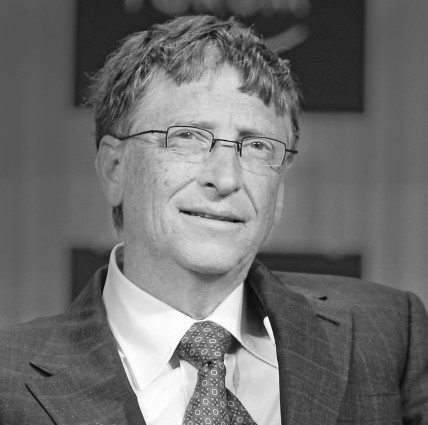 Moved the market for the computer to be more inclusive, creating the "home operating system."

Has been known as "the richest man in the world."

Co-founded the Bill and Melinda Gates Foundation, a foundation to help all people all over the world lead healthy , productive lives outside of starvation and poverty.

Time magazine named him one of the top 100 most influential people in the 20th century and 2005's Person of the Year.

Knighted by the Queen of England in 2005 for his work in helping developing countries reduce poverty and improve healthcare.

Not So Divine. In an interview with Time magazine, when asked about the divinity of the human soul and if he didn't think that there was something special about it, Gates became annoyed with the reporter. "I don't have any evidence on that," Gates replied.

Show Me the Evidence. When questioned about religion, he said "Just in terms of allocation of time resources, religion is not very efficient. There's a lot more I could be doing on a Sunday morning." Even though there are other things he could be doing on Sunday mornings, he attends his wife's Catholic church with her and their children.

Humanism At It's Finest. One of the richest men in the world, Gates stepped away from running Microsoft and instead devotes his time to the Bill and Melinda Gates Foundation, helping create a better world by advancing science in developing countries, fighting hunger and poverty, improving education, and increasing international cooperation. Gates and his wife have given over 30 billion dollars to the cause.

Early on, Gates found his love for computer programming. At age 17, he sold his first computer program. It was a time-tabling system that he sold to his own high school. The kicker on the program? It put Gates in class with all the girls he liked.

Gates often bragged to his teachers that he was going to be a millionaire by the time he hit 30. Not one to let them down, Gates instead became a billionaire at the age of 31.

Gates scored extremely well on the SATs (he got a 1590 out of 1600) and was accepted to Harvard. He didn't last long, however: he dropped out at the beginning of his junior year to pursue a career in computers. Harvard gave Gates an honorary degree in 2007, but he never returned to school to finish his degree.

Gates doesn't live in just any old house. The Gates Mansion has 24 bathrooms, a 23-car garage, a 60-ft. indoor/outdoor swimming pool with an underwater sound system, a 1000 square-foot dining room (larger than most two-bedroom apartments), and a 2,500 square-foot gym. He spends over 1 million dollars a year in property taxes alone. To top it all off, visitors wear pins in the house and the house senses the user, personalizing rooms for them. This means the room will set the temperature, music, lighting, and even the paintings hanging on the walls to match them.