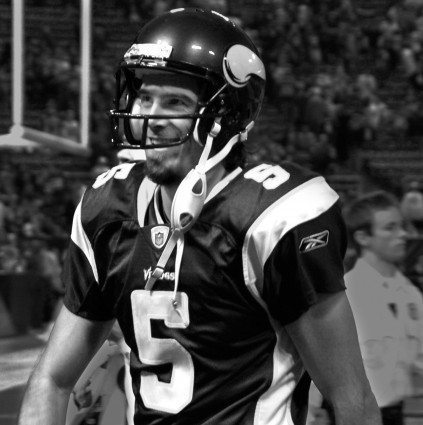 Chief Accomplishment:
Punter in the NFL for eight seasons.

Along with another NFL player, Kluwe filed an amicus brief to the Supreme Court in support of gay marriage in the case of Hollingsworth v Perry.

Kluwe is an author and has written for Sports Illustrated, the St. Paul Pioneer Press, and Deadspin, as well as writing his own book Beautifully Unique Sparkle Ponies.

In 2004, Kluwe graduated from UCLA with a double major in Political Science and History.

Cheerfully Agnostic. Kluwe claims to be "cheerfully agnostic," saying that he likes to "look at the universe and learn new things, and the only way that I can do that is by keeping open the possibility that I just may be terribly wrong about everything I thought was right."

Same Sex, Same Rights. After being approached by the Minnesotans for Marriage Equality, Kluwe started speaking out more and more about same-sex marriage and human rights. Even though his job with the NFL made it complicated, he never gave up his right to free speech.

Punted from the Team. Kluwe was with the Vikings for eight seasons, but was let go from his team. The main factor he attributed it to was the fact that his coach did not support Kluwe's stance on gay rights. The coach told Kluwe, "a wise coach once told me that there are two things that you don't talk about in the NFL: politics and religion."

Carry On. Even after being let go from a professional football team, Kluwe still speaks out for human rights. He likes to point out one of the tips that he's heard throughout his football career: "How you respond to difficult situations defines your character."

Kluwe describes himself as a "football player, a video game nerd, a sci-fi/fantasy geek, an author, a husband and father and brother."

Kluwe is also a musician. Currently he plays bass in a rock band called "Tripping Icarus," but when he was younger he was
considered a violin prodigy since he could play by ear.

On the Ellen Degeneres Show, Degeneres placed Kluwe in her "Hall Of Fame" for his gay rights activism.

Kluwe is definitely a gaming person. As a big fan of massively multiplayer online roleplaying games (MMORG), Kluwe is ranked third nationally for Dungeon Progression in the popular MMORPG World of Warcraft. He also plays miniature-based tabletop games. He is very proud of his "nerdy accomplishments." He even said "Football is how I fund my nerdy hobbies."

Since Kluwe is a big fan of video games and music, he especially loves the Guitar Hero series, a video game simulation of playing the guitar.