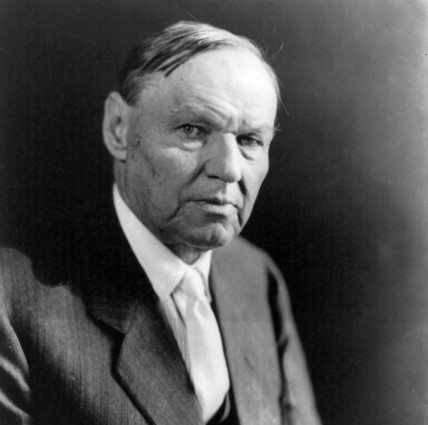 Chief Accomplishment:
Was the defending lawyer for John Scopes in the Scopes Trial, a case brought against Scopes for teaching evolution in school.

Defended workers from the Pullman Railway Company during their strike in 1894. His subsequent activism made him a celebrity of the radical left.

Was critical of the American justice system, and in 1922, published a book titled Crime: Its Cause and Treatment which detailed his concerns about the U.S. legal system and his belief that most people were in jail because of circumstances beyond their control.

Before the Scopes Trial, Darrow gained national attention for defending Nathan Leopold and Richard Loeb, who confessed to brutally murdering a fourteen-year-old boy, Bobby Franks. He took the case because he believed that the men were mentally ill, a new concept that had only recently emerged within the field of psychiatry. By arguing that they were blameless by reason of mental illness, Darrow successfully prevented the men from receiving the death penalty.

Wrote a several essays on religion, including "Why I Am An Agnostic," "The Myth of the Soul," "Absurdities of the Bible," and "Voltaire."

Thank you! Darrow came out as an agnostic during the Scopes Trial, saying "I do not consider it an insult, but rather a compliment to be called an agnostic. I do not pretend to know where many ignorant men are sure — that is all that agnosticism means."

Give Me Truth. Even as a defense lawyer, Darrow was always searching for truth and knowledge. He said "Chase after the truth like all hell and you'll free yourself, even though you never touch its coat tails." He was known for taking on the cases of the underdogs and unempowered.

Ignorance is Bliss. Darrow was an activist for education. He believed that organized religion tended to dissuade followers from educating themselves. He said, "Do you, good people, believe that Adam and Eve were created in the Garden of Eden and that they were forbidden to eat from the tree of knowledge? I do. The church has always been afraid of that tree. It still is afraid of knowledge. Some of you say religion makes people happy. So does laughing gas. So does whiskey."

The family was full of activists for human rights. Darrow's father was a staunch abolitionist and his mother was a proponent of women's rights.

Darrow never graduated from college or law school. He was admitted to the bar as a result of his self-education, oratory skill, and experience working for a law firm.

The Scopes Trial was famously depicted in the 1960 movie Inherit the Wind.

Even though he disagreed with his religious beliefs, Darrow supported William Jennings Bryan, the opposing lawyer on the Scopes Trial, during his first presidential campaign.

William Jennings Bryan died five days after Darrow won the Scopes Trial. Some accused Darrow of being responsible for his death because of the stress and shame of his courtroom confrontation questioning Bryan on religion.