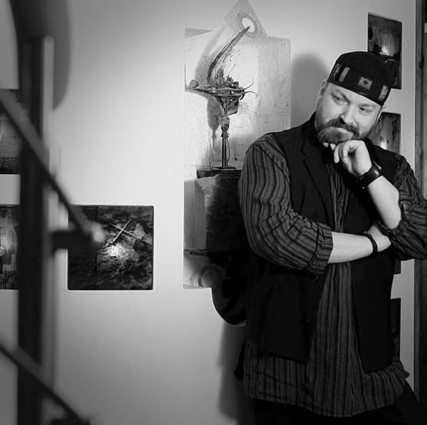 Director of several independent films including Luna, the Gospel of Us, [n]eon, and Mirrormask. He also worked as a conceptual artist on Harry Potter and the Prisoner of Azkaban.

Illustrator of a number of children's books including The Wolves in the Walls, The Day I Swapped My Dad for Two Goldfish, Crazy Hair, Mouse Bird Snake Wolf, The Graveyard Book, and Coraline.

Never Give Up. In 1986, McKean traveled to New York City to try and find a job working as a comic book illustrator with DC. He failed, but upon returning to England was paired up with Neil Gaiman, and as a team they went on to create comic books that would be considered classics. Later, DC came to England to recruit McKean for his style. How's that for turnaround?

Making it for the Kids. McKean illustrated the first Richard Dawkins book aimed at children, The Magic of Reality: How We Know What's Really True. His motivation was so that his "children would have the tools around them to ask questions."

Logical Explanation. At a conference, McKean stood up for his beliefs when audience members became agitated while he was discussing logical explanations for biblical stories. One of the stories that he was debating was the story of Jericho, where Joshua blew his horn and caused the walls of the city to fall. McKean explained the "miracle" with the use of modern data showing that the area of Jericho is prone to earthquakes.

Cooking with Science. McKean collaborated with Heston Blumenthal on The Big Fat Duck Cookbook, an autobiography, compilation of key recipes, and insight into Blumenthal's scientific method. The book was nominated in the James Beard Foundation Awards for Cooking from a Professional Point of View and won the photography/Illustration award.

As a child, McKean was not an avid reader. He didn't really grow to like reading until after creating several books of his own.

When McKean was eight years old, he met Haile Selassie, who was Emperor of Ethiopia and was revered as a Rastafarian saint. Upon meeting Selassie, McKean gave him a map of Ethiopia that he had drawn.

As a multi-talented artist, McKean is also an accomplished jazz pianist. He even founded his own music label called "Feral Records" with saxophonist Iain Ballamy.

McKean is a lover of Mexican food and chocolate, but hates sushi.