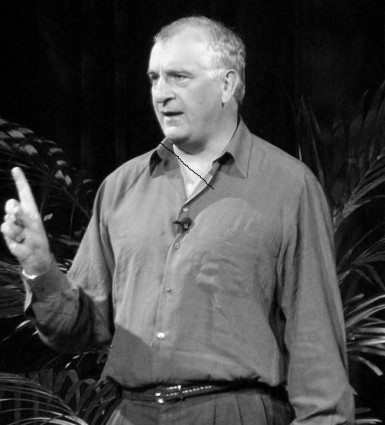 Chief Accomplishment:
Author of The Hitchhiker's Guide to the Galaxy.

Was among the first science fiction authors to use humor, which may have helped sci-fi gain a wider audience.

Wrote The Hitchhiker's Guide to the Galaxy, a satirical, comical science fiction story about Earth's role in answering the ultimate
question. It started out as a radio show in 1978. It has since been made into a book, a tv series, a movie, plays, comic books, and
computer games. You can find the radio show in your library and get a sense of entertainment for previous generations.
Co-wrote and starred in the documentary and novel Last Chance to See about visiting highly endangered species around the world.

Climbed the highest mountain in Africa, Mt. Kilimanjaro, while wearing a rhino costume to raise money for black rhino conservation.

Wrote episodes for a variety of famous shows that have remained popular over many decades, including Monty Python and Dr. Who.

You're Out of Here! Adams used humor to get people to think about ideas in atheism, environmentalism, technology, and more. "This is an interesting world I find myself in—an interesting hole I find myself in—fits me rather neatly, doesn't it? In fact it fits me staggeringly well, must have been made to have me in it!"

No Buts About It. Adams described himself as a "radical atheist," meaning he has thought about religion seriously and
is against "wishy-washy agnosticism." Richard Dawkins' famous book The God Delusion is even dedicated to Adams.

Not Monkeying Around. Adams used his fame and influence to promote activism for the environment. This
includes a charity that seeks to gain basic "human" rights to the great apes (chimps, gorillas, bonobos, and orangutans

Growing up, Adams lived with his family in London and then in an animal shelter run by his grandparents. This helped inspire a lifelong love of animals and conservation work.

From a young age, Adams enjoyed creative writing, submitting stories for his school newspaper and national publications. His teachers recognized his promise, but he had to work hard to join a comedy club of his fellow classmates during college.

Adams wrote stories for the tv show Doctor Who about a time-travelling alien hero. The series started in the 1960s and has
continued for over 50 years.

The Annual Douglas Adams Memorial Lecture raises money for environmental charities. Topics include evolution, the mathematics of the cartoon show The Simpsons, and the significance of prime numbers and the number 42 (a number from Hitchhiker's Guide to
the Galaxy that is the answer to life).

There is an asteroid named Arthur Dent, after the main character from Hitchhiker's Guide to the Galaxy.

Adams was obsessed with technology. He bought one of the earliest computers (which had just one program, a word processor!) and was often first in line to buy the newest Apple products.