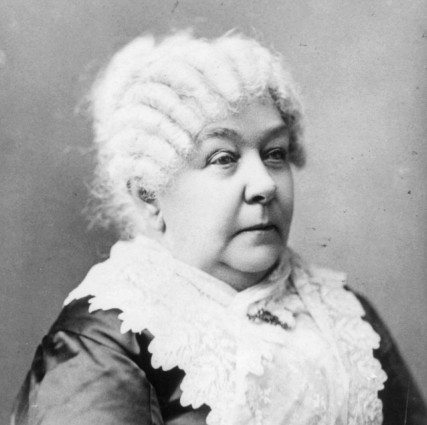 Chief Accomplishment:
Campaigned for women's suffrage (the right to vote) in the United States.

Graduated from Johnstown Academy during a time when most women did not attend college at all.

Wrote the "Petition for Universal Suffrage," a petition demanding equal rights for all citizens, including women and the newly freed slaves.

Hosted the Seneca Falls Convention in Seneca County, New York in 1848. The meeting established an agenda for the Women's Rights Movement. It was here that she read aloud The Declaration of Sentiments and Resolutions for the first time.

Religious Oppression is Not Okay. Stanton objected to the idea of women being controlled by religion. In her work for women's rights, Stanton argued that Biblical ideas about women, such as the belief that women must be submissive to men, needed to be abandoned. In an article in the 1896 Free Thought Magazine, she wrote "I have endeavored to dissipate these religious superstitions from the minds of women, and base their faith on science and reason, where I found for myself at last that peace and comfort I could never find in the Bible and the church."

Don't Matter if You're Black or White. A supporter of many different ideas that were unpopular at the time, Stanton also supported interracial marriage, even writing Fredrick Douglass, an activist for equal rights, a congratulations letter on his marriage to a white woman named Helen Pitts.

Write for Your Rights. Stanton wrote a book with a committee of twenty-six women called The Woman's Bible that raised questions about how women were treated in the Bible. Stanton concluded that "the Bible in its teachings degrades Women from Genesis to Revelation." Its ratings on Amazon.com are low, due to the fact that many people downloading it think it's a women's devotional Bible and are very surprised upon reading it.

Stanton herself came from a family of eleven children, but several of them died during childhood. When her brother, Eleazar, passed away at age twenty, she tried to soothe her father, who in turn told her, "Oh, my daughter, I wish you were a boy." Eleven-year-old Elizabeth then resolved to become an equal in her father's eyes and tried to impress him by outshining her male competitors in fields like horsemanship and academics.

Stanton never got to see women vote, as she died in 1902—eighteen years before women were granted suffrage.

Sometimes audiences would boo Susan B. Anthony and cheer for Stanton, because she was allegedly much funnier and had a
better stage presence.