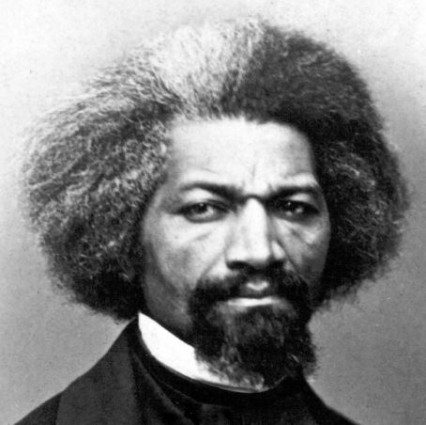 Chief Accomplishment:
Wrote an autobiography about his life as a slave which helped win favor for ending slavery in America.

Learned to read and write at age 12, despite it being illegal for slaves to do so. He read everything he could find, and some of those early books helped form his opinions on human rights and social justice.

Wrote three autobiographies about his life as a slave in Maryland. These showed the American people and lawmakers how terrible life as a slave was and how he was just like them.

Was an accomplished and lively public speaker. His most famous speech is "The Meaning of July 4 to the Negro." In it, he praises the Founding Fathers and challenges the American people to see that their vision applies to all people.

Not to be Owned. Douglass challenged the idea that people could be property. He wrote and spoke extensively on this subject, sharing his personal story to give a face to slavery. Douglass believed that non-violent methods were the only way to enact positive change. He published newspapers and gave lectures around the world.

Questioning the Religious. Douglass had a big problem with slave owners that claimed to be Christians and were still willing to enslave other people. He said, "I assert most unhesitatingly, that the religion of the South is a mere covering for the most horrid crimes – a justifier of the most appalling barbarity, a sanctifier of the most hateful frauds, and a dark shelter under which the darkest, foulest, grossest, and most infernal deeds of slaveholders find the strongest protection. Were I to be again reduced to the chains of slavery, next to that enslavement, I should regard being the slave of a religious master the greatest calamity that could befall me… I hate the corrupt, slaveholding, women-whipping, cradle-plundering, partial, and hypocritic Christianity of this Land."

A Shared Struggle. Truly believing all people are equal, Douglass supported the women's suffrage movement in addition to emancipation. He was an influential speaker at many critical events such as the Seneca Falls Convention, and wrote about women's rights in his newspapers.

Douglass escaped slavery by running away when he was 20 years old. He was imprisoned for a first attempt but didn't let that stop him. His first days as a free man in New York City were wonderful beyond description, even for this poetic man. "Anguish and grief, like darkness and rain, may be depicted; but gladness and joy, like the rainbow, defy the skill of pen or pencil."

After he was fre, Douglass lived in Ireland for two years. There he experienced true racial equality for the first time. He said he was treated not "as a color, but as a man." His friends abroad helped finance printing presses for his first newspapers.

Douglass was the first African-American nominated for Vice President, though not with his endorsement.

It was in church that Douglass gained experience and expertise in public speaking. His writing inspired others, including civil rights activists W.E.B. Du Bois and Dr. Martin Luther King Jr., and presidents Abraham Lincoln and Barack Obama.

Like many slaves of that era, Douglass was separated from him mother at a young age and raised by other family members, He also changed his name from that his master gave him, Frederick Augustus Washington Bailey.