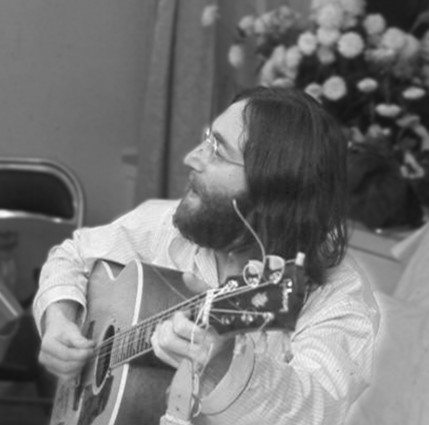 Chief Accomplishment:
Founded the Beatles, one of the most influential bands of the 20th century.

Advocated for peace through song, non-violent protest, and interviews. Many subsequent artists were inspired to use their own work to do the same.

With Paul McCartney, Lennon wrote dozens of songs in many different styles, some of which are all-time top songs. He also had a music career with his wife, Yoko Ono.

As part of the Beatles and in his solo career, Lennon won awards internationally for his songwriting and performance.

Left the music industry to focus on his family and young son, making Lennon one of the first famous examples of a stay-at-home dad.

Give Peace a Chance. Lennon was a peace activist and conveyed these sentiments through song, including "Revolution," "Give Peace a Chance," and "Imagine." President Nixon's administration tried to deport him, worried that he would unify the anti-war movement, but Lennon continued to speak out against the Vietnam War. The FBI had over 400 pages documenting surveillance of Lennon, as he worked with leaders of the Youth International Party, the White Panther Party, and others. Lennon and Ono posted billboards proclaiming "War Is Over! If You Want It" all over the world.

All Together Now. All four Beatles were "more agnostic than atheistic" and didn't believe in god. They spoke about their non-belief in interviews in the 1960s, which was very rare at the time. Lennon quoted the Bishop of Woolwich to describe his belief in god "… not as an old man in the sky. I believe that what people call God is something in all of us."

It's in the Bag. Lennon was also a social activist. He wrote a song, "Working Class Hero," about social classes, inequity, and challenging authority. He and his wife, Yoko Ono, developed Bagism, where a person wears a paper bag on their entire body to remove all ways that they could be subject to prejudice and stereotyping. While this idea was satire, the idea succeeded in getting people to think harder about social issues and their own behavior.

Lennon was born in England during an air raid during WWII.

Lennon met Paul McCartney at a church event when he was 17 years old. Together they recruited George Harrison and Ringo Starr into the Beatles and made music together for 10 years.

When he married musician Yoko Ono, they decided to use the inevitable publicity to promote world peace. They sent acorns to world leaders to plant as a symbol of peace. Yoko and John stayed in bed for two weeks discussing peace with reporters. During a subsequent "bed-in" demonstration they recorded "Give Peace a Chance."

The Beatles were one of the first bands to make music videos.