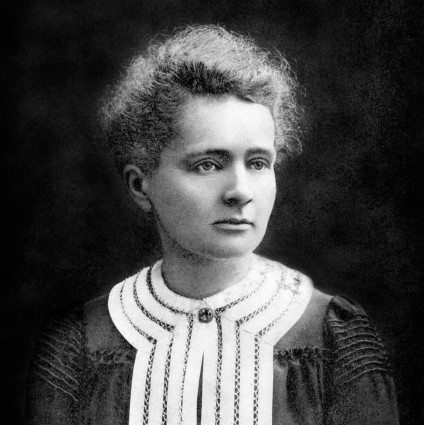 Chief Accomplishment:
Studied radioactivity, was the first woman to win the Nobel Prize, and was the only woman to win twice for two different sciences

One of the first female scientists in physics and chemistry. She worked with other top scientists in the world, including Albert Einstein, and was often the only woman at conferences.

Coined the term "radioactivity." She figured out what was happening inside the atoms and revolutionized our understanding of physics and chemistry.

Developed important medical uses for radiation, such as X-ray imaging, which is still widely used today. She also invented the use of radiation for sterilizing infected wounds and surgical equipment. Over one million soldiers in World War I were likely saved by these inventions. Interestingly, she refused to patent these ideas so that more people would benefit from them.

The only woman to have won the Nobel Prize twice for two different sciences: Physics in 1903, and Chemistry in 1911. Both awards were related to her work on understanding fundamental physics of atoms and radioactivity. Curie was also the first woman to win the Nobel Prize

Girl Power. Curie was the first woman to earn a PhD in Physics in Europe. Even today, over 100 years later, fewer than 1 in 10 physicists are women. Her father was supportive of her academic studies, but she faced constant opposition from colleagues, administrators, and organizations, and was denied jobs, publications, funding, lab equipment, fellowships, and speaking engagements.

Proving Them Wrong. Curie's scientific work challenged the traditional ideas of the time. She and her few colleagues had to stand up to renowned scientists and defend their experiments. Their experiments were sound, and we still use their methods and discoveries today

Non-Believer. Curie's father was an atheist and her mother was Catholic. After the deaths of Marie's mother and sister, she became an agnostic or atheist. She said "Nothing in life is to be feared, it is only to be understood. Now is the time to understand more, so that we may fear less.

Hometown Blues. Some organizations, like the Royal Institute in London, would not allow her to speak. Curie wanted to work at a university in her homeland of Poland, but they denied her a position because she was a woman. She was accepted to the University of Paris, where she was the first female professor. Her incredible research at the University of Paris paved the way for future generations of women scientists to seek higher learning.

The Nobel Prize is the highest honor for a scientist, similar to winning a gold medal at the Olympics. Nobel winning ran in the Curie family. She shared the 1903 Nobel Prize with her husband Pierre. Her daughter Irene Joilot-Curie won the Chemistry Nobel Prize in 1935. Irene shared the Prize with her husband. Their children are also scientists (though not Nobel winners).
Curie was born in Warsaw, but moved to Paris to study physics, chemistry, and mathematics. She met her husband Pierre in a lab in Paris, where they were studying chemistry. They had a civil union instead of a religious marriage and then worked together in the lab for the rest of their lives.
Curie discovered two elements, radium and polonium. The latter was named for her home country of Poland.
While the Curies contributed to understanding radiation, they did not know of its negative effects on human health. Both Curie and her husband died from radiation poisoning. Her research notes from the early days are so contaminated with radiation that they are stored in lead boxes.
During World War I, Curie offered to donate her solid gold Nobel Prizes to help the war in France. The French government declined