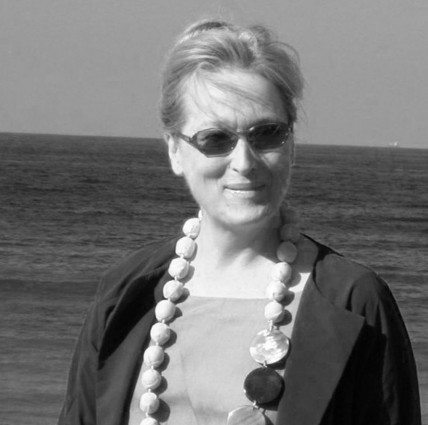 Chief Accomplishment:
Nominated for more Academy Awards than any other actor and one of the most awarded actors in the world.

Acted in over 70 films, including The Devil Wears Prada, The Hours, Doubt, the Fantastic Mr. Fox, and Mama Mia!

Won Academy Awards for her performances in Sophie's Choice, The Iron Lady, and Kramer vs. Kramer.

Graduated from Vassar College in Drama and English, and received honorary doctorates from Yale, Dartmouth, Princeton, and Harvard.

Awarded the 2010 National Medal of Arts from President Barack Obama.

In On the Joke. At the 2012 Golden Globes, Ricky Gervais made the comment that of all the actors and actress would give these lengthy thank you speeches when all they needed to do was thank the big two, their agent and God. Streep later in the evening went on to win Best Actress and said that she wanted to thank her agent and "God," who she equated to Harvey Weinstein, a big-name Hollywood producer and film studio executive.

Not Your Typical Mall. Streep has been trying to get Congress to allow a National Women's Museum to be built in Washington D.C. on the National Mall. On the building of this museum, she said, "I'm very interested in the stories of women, especially the unwritten history of women, and I'm trying very hard to get Congress to let us purchase land on the National Mall to build the first women's national history museum, something that we really should have."

The Power of the Human Aggregate. When asked by a reporter how she deals with the concept of aging and death, she answered "Consolation? I'm not sure I have it. I have a belief, I guess, in the power of the aggregate human attempt. In love and hope and optimism—you know, the magic things that seem inexplicable."

In high school, Streep was a cheerleader and her school's homecoming queen.

Streep attended Yale's Drama School, with another famous actor, Sigourney Weaver (star of the movie series, Aliens). While in school, they were constantly pitted as rivals by their teachers. They even both once starred in a play together called The Frogs. The entire play took place in a swimming pool.

Streep had initially planned on attending Yale to study Law. The only reason she didn't was because on the morning of her
interview, she slept past her alarm.

Early in her career, Streep tried out for the King Kong remake. The producer, Dino DeLaurentis, turned to his son and in Italian told him that Streep was too ugly for the part and looked like a pig. Streep shocked his socks off when she replied in fluent Italian.

For her role in The Music of the Heart, Streep learned to play violin. She practiced six hours a day for eight weeks in preparation.