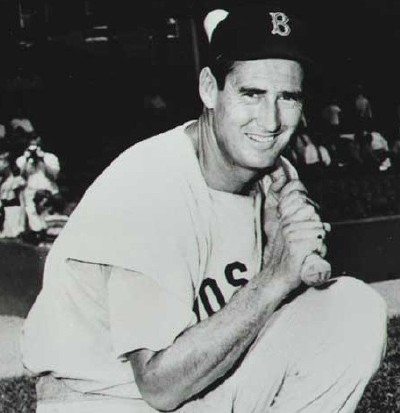 Chief Accomplishment:
A professional baseball player with the Boston Red Sox, considered to be one of the best hitters of all time with a .406 average in 1941.

Made his Major League debut at the age of 20.

Inducted into the Baseball Hall of Fame in 1966, the first year he was eligible for induction.

Served as a pilot in both World War II and the Korean War.

Awarded the Presidential Medal of Freedom, the highest civilian award in the U.S.

Baseball for Everyone. Spoke out for the acceptance of black players into the Baseball Hall of Fame during his induction speech.

Out After Death. After his death, William's friend and former teammate Johnny Pesky revealed that Williams was nonreligious. Williams' family backed up Pesky's claims, saying "The faith that many people place in god, we place in science and other human endeavors."

Is It Cold in Here? Although Williams didn't believe in God, he agreed to be cryonically frozen after his death, a process where a body is stored at low temperatures in hopes that in the future they will be able to regenerate the tissue in hopes of living once again. Williams agreed to the cryonics at the behest of his son, John-Henry who was heavily involved with cyronics research. After his death in 2002, Williams' body was flown to Scottsdale, Arizona to be frozen with an organization called Alcor Life Extension Foundation. They stored both his head and torso separately.

In 1957, he became the oldest player to lead the league in batting average.

There is a tunnel in Boston and a highway in San Diego named after him.

Williams cursed. A lot. According to a mutual friend of Williams and General Patton, Williams swore more out of the two.

Near the end of his life, Williams spoke out against being frozen. He originally wanted to make his son happy, but his wishes were to be cremated after his death.

When the surgeon cut off Williams' head to be frozen, he did most of the surgery with a carving knife.

After his head was cryogenically frozen, there was a tell-all book written by an ex-executive of Alcor Life Extension Foundation, explaining how Ted Williams' frozen head was abused at the organization. An employee would take swings at the frozen head with a baseball ball to try and dislodge it from a tuna can they would rest the heads on.