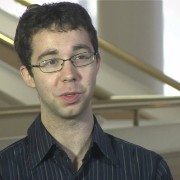 Matthew is a PhD student at the University of South Carolina in the field of experimental psychology. He was raised as a Catholic up until college where he became an Atheist; he became more involved in the atheist movement when he went to graduate school. He identifies as a Humanist as it is a less controversial term than Atheist. He is a Humanist and Openly Secular!