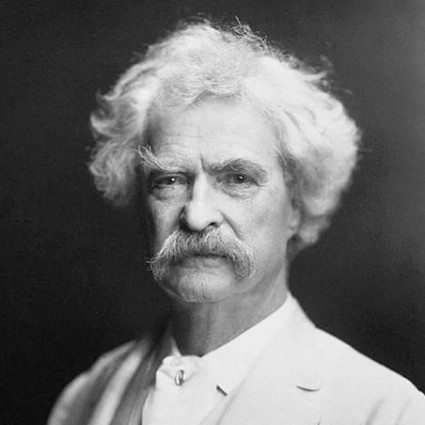 Chief Accomplishment:
Writing classic American novels such as The Adventures of Tom Sawyer and Adventures of Huckleberry finn, and many other novels, essays, and criticisms.

Became a prominent and respected civil rights activist during his lifetime.

Was a published writer by age fifteen, when he worked as an apprentice for a local paper and contributed short stories and witty essays.

Over the course of his life, Twain worked as a novelist, printer, gold prospector, and steamboat pilot.

Delivered the famous Votes For Women speech in 1901 in favor of women's suffrage (the right to vote).

Family Ties. While Twain remained a Presbyterian officially, he is known for critiquing Christianity as an organized religion and was especially critical of practices like faith-healing. "I would not interfere with any one's religion, either to strengthen it or to weaken it. I am not able to believe one's religion can affect his hereafter one way or the other, no matter what that religion may be. But it may easily be a great comfort to him in this life – hence it is a valuable possession to him."

College for All. Twain was an advocate for education. He helped fund Helen Keller's education as she pursued a degree. He also sent at least one African-American student to Yale Law School, during a time when it was rare for a university to admit black students. He once wrote, "Anyone who stops learning is old, whether twenty or eighty. Anyone who keeps learning stays young. The greatest thing you can do is keep your mind young."

As a man about town, Twain was friends with many famous and influential people during his lifetime, including the scientist Nikola Tesla and fellow American novelist William Faulkner.

Twain was a cat person. At one point it was rumored that he owned nineteen cats. He wrote, "When a man loves cats, I am his friend and comrade, without further introduction."

He was born right after Haley's Comet was viewed in the sky in 1835. He swore to his friend's and family that he came in with Haley's Comet and he'd go out with Haley's Comet. He held true to his word, dying of a heart attack in 1910 the day after the comet's closest pass to Earth.