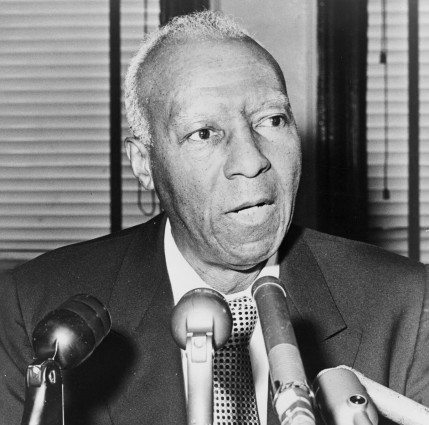 Fought against discrimination and black exclusion from labor unions by founding labor unions for blacks, including founding the Brotherhood of Sleeping Car Porters.

Founded the League of Nonviolent Civil Disobedience Against Military Service and threatened an African American military boycott. In response to that pressure, President Truman issued Executive Order 9981, which banned segregation and discrimination in the armed forces.

Principal organizer of the 1963 March on Washington for Jobs and Freedom. The march brought over 200,000 people to Washington, D.C. to protest segregation and disenfranchisement.

Was awarded the Presidential Medal of Freedom by President Lyndon B. Johnson.

Change through Collective Action. Randolph believed that people needed to organize into communities in order to demand justice and create change in the world. He said "Freedom is never given; It is won." In 1925, he helped found the Brotherhood of Sleeping Car Porters which, after ten years of pressure, won the right to negotiate a contract. In 1937, the Brotherhood become the first all-black union in America to win wage increases, work-hour reductions, and official representation rights.

Socialist for Change. As a socialist, he believed that the world can only be just and fair when everybody shares access to wealth, education, and culture. Randolph was a tireless advocate for the poor, disassociated, and disenfranchised throughout his entire life. He believed that change was possible and dedicated his life to bringing that change to the world.

Belief in Democracy. Randolph believed that democracy was not just giving people the right to vote, but also making
sure that all of people's basic needs are met and that everyone is fully able to participate in and enjoy the benefits of a
democratic society. He fully believed that "a community is democratic only when the humblest and weakest person can
enjoy the highest civil, economic, and social rights that the biggest and most powerful possess."

Randolph's father was an ordained minister in the African Methodist Episcopal Church.

After graduating as valedictorian of his high school in 1907, Randolph moved to New York to pursue an acting career. He studied philosophy and economics at City College but never graduated.

In 1917, Randolph became the founder and editor of The Messenger, later called The Black Worker, a radically progressive magazine which was called "one of the most brilliantly edited magazines in the history of American Negro journalism."

When Martin Luther King Jr. delivered his "I Have a Dream Speech," Randolph was by his side. Randolph also spoke at the march and was one of the major organizers.

In 1970, Randolph was named Humanist of the Year by the American Humanist Association.