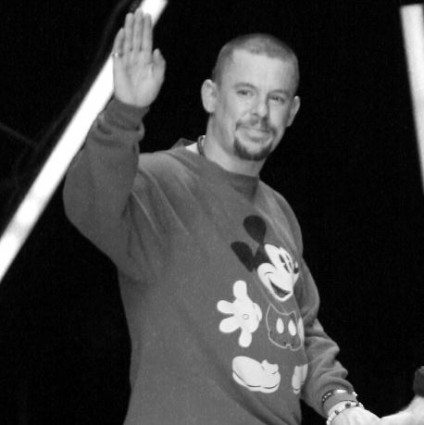 Chief Accomplishment:
Founder of his own fashion label, Alexander McQueen.

After dropping out of high school at sixteen, he apprenticed with highly renowned tailors on Savile Row, where he learned about construction, tailoring, and pattern cutting.

After college, he was hired by the extremely prestigious French haute couture fashion house Givenchy, owned by Louis Vuitton.

Although it was a prestigious job, McQueen took it reluctantly, and was always uncomfortable with any constraints placed on his creativity. He remained at the firm from 1996 to 2001.

At the time of his death, McQueen's men's and women's collections were distributed in about 40 countries, and he had stores in New York, Milan, and London.

Rebel, Rebel. Not one to follow the pack, McQueen has said, "I believe in depicting what's going on. I'm a big anarchist. I don't believe in religion, or in another human being wanting to govern over someone else. The themes that go through my shows will continue to." He translated his ideas about the world into his clothing, which were set apart from other designers by their beauty and craftsmanship, strong silhouettes, and the marriage of tradition with the avant-garde.

Breaking the Mold. McQueen was proud of breaking the traditional mold of a successful designer. He dropped out of his high school and was from a lower class background. His first fashion collection was called "Taxi Driver," honoring his father's profession.

Out and Open. McQueen was openly gay, describing his coming out at a young age as going "straight from my mother's womb on to the gay parade."

McQueen was the youngest of six children and loved scuba diving.

McQueen was not considered to be traditionally good looking and had bad teeth. he said, "I don't put such an importance on clothes, anyway. I mean at the end of the day they are, after all, just clothes, and I can't cure the world of illness with clothes. I just try to make the person that's wearing them feel more confident in themselves because I am so unconfident. I'm really insecure in a lot of ways and I suppose my confidence comes out in the clothes I design anyway. I'm very insecure as a person."

Was nicknamed "the hooligan of English fashion."

Early in his career, McQueen became famous for his bumster trousers, a style that set off a decade-long trend for low-rise jeans.

One of McQueen's fashion shows featured a model who was an amputee walking the runway on carved wooden legs.

In 2010, shortly after the death of his mother, Alexander McQueen committed suicide.