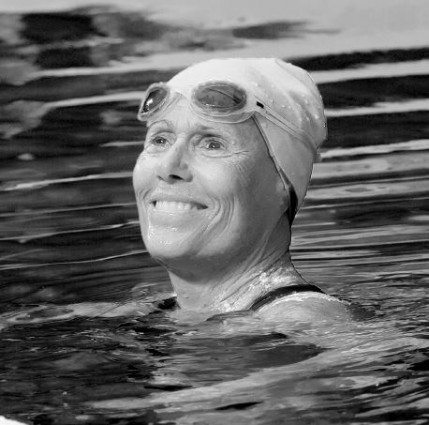 Chief Accomplishment:
The first person to swim from Cuba to Florida (110 miles) without the aid of a shark cage.

Broke the time record for swimming around the island of Manhattan (28 miles).

Journalist for several media outlets including The New York Times, Newsweek, and NPR's All Things Considered.

Swam from the Bahamas to Florida (102 miles).

Authored several books, including Other Shores, Basic Training for Women, and Boss of Me: The Keyshawn Johnson Story.

Was ranked thirteenth out of all U.S. women squash players.

It's Never Too Late. Nyad started swimming when she was in the seventh grade, but at the age of thirty she turned her focus on journalism and sportscasting. After several unfortunate life events, Nyad came back to swimming at the age of 60. She set a goal for herself to swim from Cuba to Florida, and tried the swim four times and failed due to asthma, bad weather, and box jellyfish stings. Once after going home from a swim, she gathered up all her swimming gear and threw it in the trash. But a few days later she went back to the trash can, dug out all her equipment, and went back to practicing. Even her friends wanted her to stop, because of the risk to her life and because her goals made her look like she was crazy. But, on her fifth attempt at the age of 64, she finally succeeded in the swim against all odds.

Sexual Abuse. From a very young age, Nyad was sexually abused by her stepfather and her swimming coach. Now she speaks out against sexual abuse, and says about her story, "It's just my life. I don't suffer through it. I'm no victim. I talk about it because it is real and it is an epidemic, just to put it out there."

Staying Classy. In an interview with Oprah Winfrey, Nyad told Winfrey that she was an atheist who is in awe and wonder of the natural world. When Winfrey said that she didn't think Nyad was an atheist, Nyad was calm and helpful explaining the difference, saying that "There is an inference with God that there is a presence, either a creator or an overseer."

When Nyad first went to college at Emory University, she was expelled for attempting to parachute from a fourth-story dormitory window.

When swimming, Nyad sings songs in her head to keep time. She keeps a "playlist" of about 65 songs in her head. She's said, "When I complete 2,000 'It Ain't Me Babe's, Bob Dylan's version, I know I've gone 4 hours and 45 minutes exactly. I never lose track.

Graceful on land as she is in water, Nyad was a contestant on Dancing with the Stars, a television hosting celebrities in a dance competition; however, she was voted off after two episodes.

Nyad has always been inspired by survival stories, like the polar bear explorers Roald Amundsen and Robert F. Scott.

Even when she was young, Nyad had dreams to go to the Olympics, but because of a heart condition called endocarditis she lost the speed she needed for the shorter races.