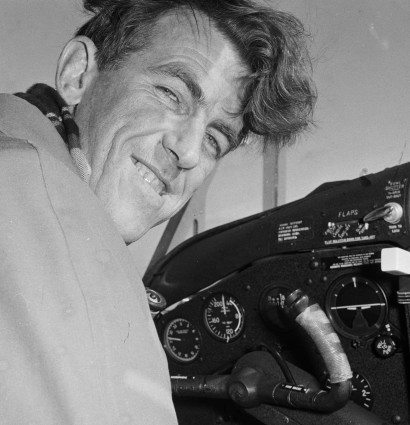 Part of the second party to reach the South Pole, and the first to do so by using motorized vehicles.

Prayers Won't Save You Now. When being interviewed, Hillary was asked about an occasion where others might have prayed and what he thought instead. He said "coming down from Nup La Pass on one occasion in very difficult conditions, through crevasse country I stepped on a piece of snow which happened to be a thin bridge over a crevasse and…I shot through the thin bridge and started falling into the depths of the crevasse. Well my thoughts, which were fairly quick at the time, were just, ‘How can I overcome this?'" He used his wits to wedge his heels in one side of the crevasse and his shoulders into the other side, then marched his way back up!

Choose Your Own Path. Hillary once said "I have no particular religious beliefs at all, but I am interested in all religions." He especially enjoyed Tibetan Buddhism and the prominent idea of that religion was that you must choose your own path. He goes on to say "I think that we have to learn to choose our own path, to make our own way, and in many ways, to overcome our own problems."

Sure Pals With the Sherpas. Hillary's Mount Everest climb sparked a deep love for the Sherpa people, or the people who live in the highest mountainous communities near Mount Everest and the Himalayan Mountains. He started the Himalayan Trust, a nonprofit group that helps fund building schools and hospitals in the Himalayan Mountains, along with helping to preserve the culture of the people and re-planting the forest around the mountains, which due to the increase of tourism to climb the mountains, was being used too rapidly for the new growth to keep up.

When he was a child, Hillary was shy, quiet, and loved books. It was on a trip in high school climbing Mount Ruapehu that he first found his love for mountain climbing.

Hillary was a pilot of flying boats in the military during World War II. He was sent home after an accident in which a can of petrol fell and set a speed boat that he was piloting on fire, giving him severe burns.

After failing to do well in college, Hillary became a beekeeper. Beekeeping ran in the family, since both Hillary's brother and father were also beekeepers. It also was convenient, since it left him time in the winters to practice mountain climbing.

Because of his Everest climb, Hillary was knighted by Queen Elizabeth II.

Although extremely proud of his accomplishments, how he celebrated reaching the peak of Mount Everest was fairly unusual. He said "Having paid my respects to the highest mountain in the world, I had no choice but to urinate on it."

On his first visit to the North Pole, Hillary was accompanied by Neil Armstrong, the first man to walk on the moon, Steve Fossett, the first man to travel around the globe in a hot air balloon, and Patrick Morrow, the first man to climb all the tallest mountain peaks on all the continents. Talk about a crazy vacation!