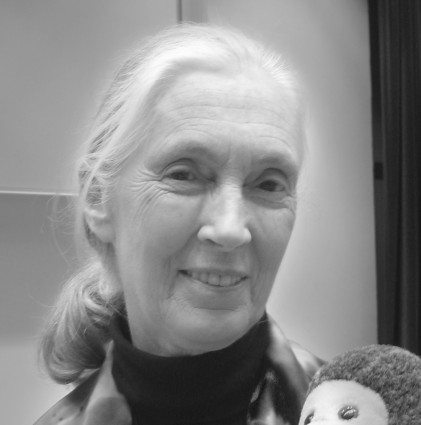 Chief Accomplishment:
Studying wild chimpanzees in Tanzania and helping strengthen our understanding of the evolutionary connections between primates (including humans).

Spent 45 years studying the social behavior of wild chimpanzees in Africa. She was accepted into a chimpanzee troop for almost two years, the only human to have become an integral member of another species' society. She was the first person to discover that other animals use tools. Her studies of chimps helped motivate better understanding of primate behavior and our evolutionary ties.

Started the Jane Goodall Institute, a nonprofit organization that seeks to protect the great apes through education, legislation, and work in the wild apes' local communities.

In 2002, the United Nations named her a UN Messenger of Peace. She said "to achieve global peace, we must not only stop fighting each other, but also stop destroying the natural world."

Founded the Roots & Shoots nonprofit to enable kids and young adults to take action on conservation and humanitarian issues. The programs help students learn how to serve their own communities as well as think on a global scale.

Doing What You Love.Goodall loved animals all her life. She started studying chimpanzees in Africa without having formal education on primates or research methods. Her research indicated that chimps had complex personalities and social structures, and were more prone to violence than expected. She had to defend these ideas to the scientific community, speaking against many of the famous researchers of the time. Goodall was featured in Apple's Think Different ad campaign for these reasons.

Proving Them Wrong.Until Goodall's research, humans were considered the only animal capable of making and using tools. Accepting that other animals use tools was a major shift in understanding for biologists, evolutionary scientists, anthropologists, and others. Today, it is known that primates, elephants, bears, whales, sea otters, birds, fish, octopuses, and even insects make and use tools. Some of these animals even teach toolmaking to their offspring.

At One with Nature.One reason for Goodall's conservation efforts is her deep connection to the natural world, both through her scientific research and her personal feelings. She said "I don't have any idea of who or what God is. But I do believe in some great spiritual power. I feel it particularly when I'm out in nature. It's just something that's bigger and stronger than what I am or what anybody is. I feel it. And it's enough for me."

Animal Rights.Goodall has worked towards giving nonhuman animals the same rights as humans. Primates, dolphins, whales, and elephants are some of the animals that may someday receive legal rights, with interesting philosophical implications.

Goodall's official title is Dame Commander of the Most Excellent Order of the British Empire — she was knighted by Queen Elizabeth II!

Goodall took so many notes in Africa that she had to hire people just to organize them. All of her notes are now digitized and studied by students around the world.

An author of dozens of books, Goodall has written ten books for children. Many more books have been written about her.

Goodall is a vegetarian. She believes that farm animals should be treated better due to their intelligence and ability to feel pain and fear. She also opposes the environmental impacts of industrial farming.

In Disney World's Animal Kingdom, Goodall is recognized on the Tree of Life, the centerpiece of the park.