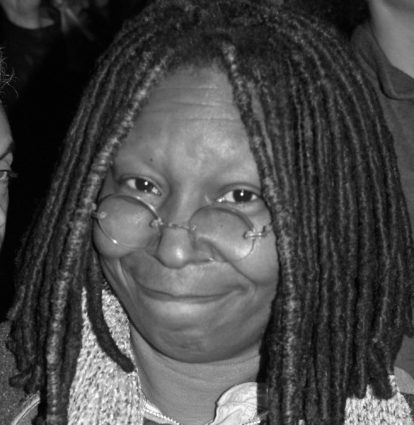 One of just a few people to win an Academy Award, Tony, Grammy, and Emmy.

The second black woman to win an Academy Award (52 years after the first).

The first woman and first African-American to host the Academy Awards.

United Nations Ambassador working for women's rights, children's rights, HIV/AIDS, and other global issues. She is also an activist for LGBT rights, homelessness, education, and more.

Is an author of a children's book series and a modern version of Alice in Wonderland set in New York City.

Taking on the Big Roles. Goldberg has always addressed important yet controversial topics in her work. Her early improvisational comedy dealt with racism, sexism, and gender roles. Her first big role in a movie, The Color Purple (based on a Pulitzer Prize-winning book), addressed these issues as well, but in a more serious way.

Trekkie. Goldberg was inspired by Nichelle Nichols, who played Uhura on Star Trek in the 1960s. When young Goldberg first saw Uhura, she ran through the house saying "Momma! There's a black lady on TV and she ain't no maid!" Whoopi never let being a woman or black stop her from accomplishing her goals.

Mixing Pot of Life. Growing up in New York, Goldberg was exposed to a multicultural background but considers herself an atheist. "My family is Jewish, Buddhist, Baptist, and Catholic. I don't believe in man-made religions."

Before It Was Cool. Her involvement in the LGBT and HIV/AIDS movements began in the 1980s, before other celebrities publicly supported these issues. Whoopi was brave enough to speak up for what was right, even when it wasn't the popular opinion.

"Whoopi" is her stage name; she was born Caryn Johnson. She got her name because she wasn't afraid to pass gas and her friends joked she was a whoopee cushion. She said "If you get a little gassy, you've got to let it go."

Goldberg is dyslexic but was undiagnosed until she was an adult. She had trouble in school despite being very smart. She loved stories but had trouble reading.

After her childhood watching Star Trek, Goldberg requested a part on Star Trek: The Next Generation because the show portrayed a multi-ethnic, open-minded society.

While acting in East Germany while it was occupied by the Soviet Union during the Cold War, Goldberg smuggled things across the border for her fellow actors, such as magazines, movies, radios, and medicines.