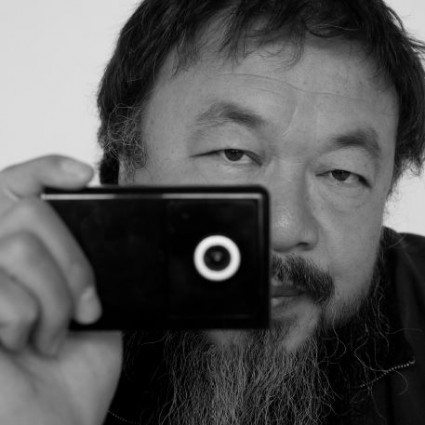 Studied at the Beijing Film Academy, The Art Students League, and Parson's School of Design.

Helped design the "bird's nest" Olympic stadium for the 2008 Olympic Games in Beijing, and started gaining notoriety for his activism by refusing to participate in the Olympic opening ceremony due to his criticisms of the Chinese government's propaganda around the games.

Repeatedly harassed, detained, and jailed for his activism in China against the Chinese authorities. In 2011, Weiwei was arrested by Chinese authoriteis and held in isolation for 81 days. When he was finally released, he was charged with tax evasion and fined. Weiwei maintains that the accusations were fabricated to silence his political speech. Upon his probationary release, Weiwei has been prohibited from traveling abroad or engaging in public speech, and is subject to government surveillance and censorship.

In 2011, ArtReview magazine named him the most powerful artist in the world.

Has had work appear in major exhibitions in London, New York, Munich, and Tokyo.

Delivering the Message. Weiwei is an activist for freedom of information and expression. He has been especially critical of the authoritarian Chinese government, their control of information, and their use of propaganda. Weiwei utilizes diverse artistic forms to deliver this message, including sculpture, pottery, photography, performance, architecture, documentaries, tweets, and blogs. "My favorite word? It's 'act.'" he says.

Censored. Throughout his career, Weiwei has continually called the Chinese regime to account. Most notably, he created a documentary about the children who died in poorly constructed government schools during the 2008 Sichuan earthquake. On the matter he said, "I have been censored countless times for blogging on Sina Weibo, sharing my opinions and publishing the names and stories of children killed during the Sichuan earthquake. The authorities delete my sentences. When they find that I'm writing too much, they shut off my IP. So I have to use another one and write under another username. Sometimes, in one month, I have to use a hundred different IP addresses.

Not Much Choice. Growing up in a Chinese labor camp, Weiwei believed that there was religious freedom in China. It was only later in life he found out about religious outliers being imprisoned with other activist. he says, "One of the reasons religions are widely accepted is spiritual laziness and its resulting fear."

Weiwei is often compared to Andy Warhol, who also combined his persona and art with charged political messages.

A documentary titled Ai Weiwei: Never Sorry was made about his life, art, and activism.

When he was living in New York, Weiwei became friends with the famous beat poet Allen Ginsberg. Weiwei even brought Ginsberg home to meet his father.

Weiwei's father is the renowned modern poet Ai Qing. His father was identified as a political dissident by the Chinese government and in 1958 the entire family was sent to a labor camp. Weiwei was one year old. The family did not return to Beijing until the death of Mao Zedong in 1976.