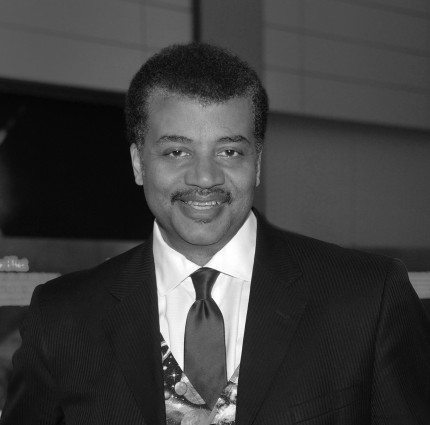 Chief Accomplishment:
Director of the Hayden Planetarium at the Rose Center for Earth and Space in New York City

Served as head of the NASA Advisory Council.

PBS aired a documentary called The Pluto Files which chronicled Tyson’s successful debates in an effort to demote Pluto from its status as a planet.

Anti-Creationism. Tyson has fought against the intelligent design and creationist movements, as well as other anti-science groups like climate change deniers. He said, “Another area of fuzzy thinking out there is the movement called intelligent design. It asserts that some things are too marvelous or too intricate to explain. The contention is that these things defy common scientific accounts for cause and effect, and so they’re ascribed to an intelligent, purposeful designer… So let’s start a movement called Stupid Design, and we’ll see where that takes us. For example, what’s going on with your appendix? It’s much better at killing you than it is at anything else. That’s definitely a stupid design…or the fact that you breathe and drink through the same hole in your body, causing some fraction of us to choke to death every year? And here’s my last one. Ready? Down there between our legs, it’s like an entertainment complex in the middle of a sewage system. Who designed that?

Views on Ethics. Tyson has also branched out beyond his science background and talked more explicitly about what it means to him to live a good life, saying “For me, I am driven by two main philosophies: know more today about the world than I knew yesterday, and lessen the suffering of others. You’d be surprised how far that gets you.”

Science Promoter. Tyson has made it his mission to promote science education. He is also an activist arguing for the promotion of science education in public schools and the importance of funding a strong space program.

Science as Poetry. Tyson has coined a number of famous phrases bringing science and poetry together. He is famous for his quotation “We are all connected to each other biologically, to the earth chemically, and to the rest of the universe atomically. That’s kinda cool! That makes me smile and I actually feel quite large at the end of that. It’s not that we are better than the universe, we are part of the universe. We are in the universe and the universe is in us.”

A parody Facebook page called Tysonism that treats Tyson as their prophet.

Tyson’s dedication to learning has paid off! He has seventeen honorary doctorates on top of the Ph.D. in Astrophysics he earned from Columbia University in 1991

Living in New York, Tyson was an eyewitness to the Twin Towers attacks on 9/11. His home was just a few blocks from the site of the attack.

Tyson was one of the people who argued that terrestrial planets and gas giants should be grouped together. That put Pluto in the dwarf planet category, tossing it out of the planets.