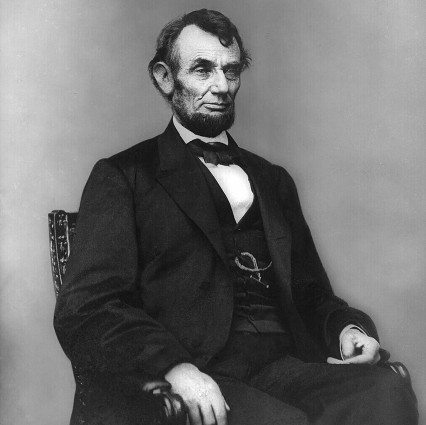 Chief Accomplishment:
U.S. President who was instrumental in abolishing slavery with the passing of the 13th Amendment and the Emancipation Proclamation.

Led the U.S. during the Civil War.

Helped create a plan for reconstruction of the Union, including measures to help newly freed slaves, re-establish political leaders in the South, and rebuild the physical damage sustained during the Civil War.

Reiterated the principals of human equality in his Gettysburg Address, which is one of the most-quoted speeches in American history.

First major US political figure to publicly support extending the right to vote to women.

Passed the bar exam and became a lawyer without going to law school. He was entirely self-taught by reading books.

Helped establish a national currency with the National Banking Act.

No Church? No Problem. Lincoln was raised in a very religious family, yet he never joined any church. When he was 22, his family moved to New Salem IL, which had no churches in the surrounding area. He was never one to attend church, even into his later years.

Forward Thinking Reading. Even at an early age, Lincoln understood and accepted universal laws and evolution. His reading list featured freethinkers such as Thomas Paine, Voltaire, and Charles Darwin.

If You Don't Have Anything Nice to Say, Keep it to Yourself. His unorthodox views and lack of religious affiliation were often attacked by other politicians and almost cost him his congressional bid. After that, he kept his views private but always respected the beliefs of others. A fellow lawyer, James Adams, labeled Abraham Lincoln as a deist, but Lincoln never labeled himself.

Let's Eat. Lincoln was not in the habit of saying a prayer before meals, even though it was a much more common practice during his time.

Lincoln was a highly skilled wrestler.

Starting a new style, Lincoln was the first president to have a beard during his time in office.

Without his signature stove pipe hat, Lincoln was the tallest president, standing at about 6'4".

Lincoln was the only president to ever obtain a patent. He was mechanically inclined and liked to take things apart just to see how they worked. In 1849, he got a patent for a device to lift ships over sandbars.

Lincoln was the first Republican president and helped found the Republican party (the modern Republican party is much difffferent from what was originally created). It emerged when the Kansas-Nebraska Act wanted to extend slavery even further into the territories.

While attending the Ford Theatre, Lincoln was assassinated by John Wilkes Booth.

Lincoln had the first ever inaugural photograph that is, he was the first president to be photographed at his inauguration. Strangely enough, also featured in the photograph is John Wilkes Booth, later to be his assassin.