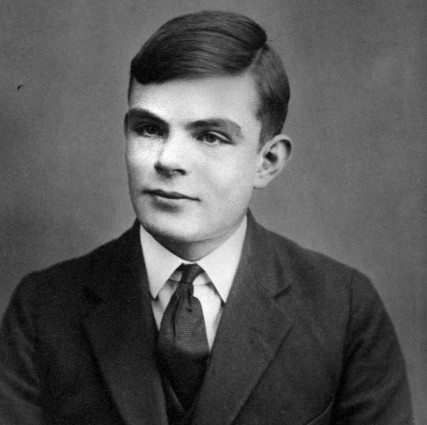 Chief Accomplishment:
Devised the Turing Test, which is used to determine if a machine possesses artificial intelligence. The reverse of the Turing Test is the Completely Automated Public Turing test to tell Computers and Humans Apart (CAPTCHA), which you may have used in online forms.

Worked as a cryptanalyst (codebreaker) for Britain during World War II. He invented many new ways to break codes, including the Turing Machine, an electro-mechanical machine that helped the Allies.

Designed one of the first computers: the Automatic Computing Engine. He proposed and built many other machines and ideas that greatly influenced computers. All modern computers use his ideas, which include digital information processing or binary coding of zeros and ones.

Researched mathematical biology, including the Fibonacci sequence and the golden ratio in nature. These mathematical patterns, called fractals, are found in plant growth, shoreline shapes, and even in the human body!

Contributed to the study of quantum physics in addition to proving many mathematical theorems.

Never Give Up. Turing's ideas about making a computer that processed information digitally were not well-received by his fellow scientists. He did not give up on his ideas and eventually led his own research group.

Only the Good Die Young. Turing learned about the horrors of war, and he saw many friends die at a young age. This was a factor in him becoming an atheist, because it didn't seem consistent with the existence of a just, loving god.

Persecuted for his Sexuality. Turing was gay, which was illegal in Britain at the time, and eventually a relationship with a man brought him to court. He pled guilty, but said there was no reason for him to feel guilty. Turing was convicted of "gross indecency," and sentenced to undergo forcible hormone treatment. He also lost his security clearance, which prevented him from working in codebreaking and computer research.

Turing was a marathon runner (26.2 miles in 2 hours 46 minutes) and almost qualified for the British Olympic Team in 1948.

Turing is widely respected by many scientists as one of the greatest minds of the 20th century.

The Turing Award, given for computing, is the equivalent of the Nobel Prize for computer sciences.

Turing's death may have been an accident in his chemistry lab, but some think it was a suicide as a result of his persecution for being gay.

In 2013, the British government formally pardoned and apologized to Turing for their treatment of him due to his sexual orientation.