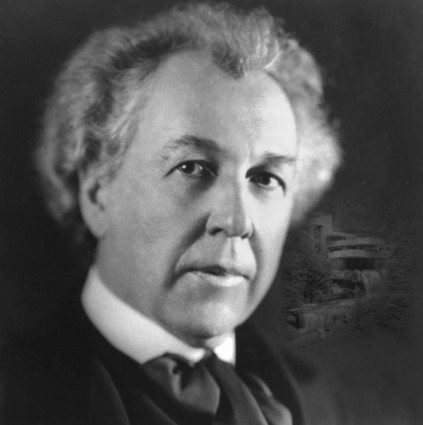 Called the "greatest architect of all time" by the American Institute of Architects.

Pioneered new ideas about how to build houses, such as how to make them more energy efficient.

Founded the Frank Lloyd Wright School for Architecture at his "Taliesin" house in Spring Green, Wisconsin. This school incorporated classes on architecture along with dance, music, and earth science.

Built his most well-known building "Falling Water" in Mill Run, Pennsylvania. It is built over a natural waterfall that flows through the house.

Nature as God. Wright believed that God was found only in nature, and that the idea of God was man's explanation for the majesty and the tragedy of the wilderness. He once said, "Nature is my manifestation of God. I go to nature every day for inspiration in the day's work. I follow in building the principles which nature has used in its domain."

Preaching the Word of Nature. Wright had a very deep appreciation for nature: the first rule in organic architecture is to respect nature and the land that you are working with. He would work primarily with local materials and would encourage his students to do so as well. He would call organic architecture the "simple laws of common sense."

A Universalist Upbringing. His father was Baptist until he married Wright's mother, when he converted to Unitarianism. Wright was also raised as a Unitarian. He even designed two Unitarian Universalist churches: Unity Temple in Oak Park, Illinois, and the Meeting House in Madison, Wisconsin.

Before he was born, Wright's mother declared that her son would grow up to build beautiful buildings. She decorated his nursery with pictures of cathedrals to motivate him. She also practiced a method of youth education called Froebel, a system of building with blocks and paper that was very geometric.

He did not graduate high school but was admitted to the University of Wisconsin-Madison as a special student.

Wright was a big fan of traditional Japanese art and often decorated his houses with Japanese woodblock prints, called ukiyo-e, along other Japanese inspired architecture pieces.

Wright had a troubled family life and wasn't able to stay in one place for very long.

When Wright was young, his mother and father wanted to "toughen him up." They sent him to work on his uncle's farm because Wright was a shy, quiet boy.

Some might go as far as calling Wright a "control freak." He was notoriously hard to work with and would often tell the clients whose homes he built where their furniture should go and look down on their interior decorating skills.