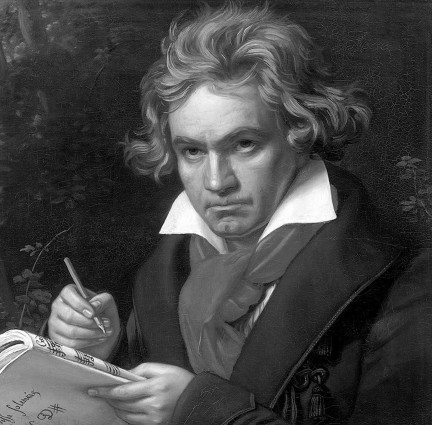 Chief Accomplishment:
Remains one of the most influential and well-known composers of Western music.

Published his first work, 9 Variations in C Minor for piano, before the age of twelve.

Composed music that served as a transition between the Classical and Romantic eras in western "art music."

Considered to be the world's first "independent composer," meaning he was able to live without financial constraints and was free to do anything he liked. The condition of this financial freedom was that Beethoven didn't leave Vienna.

Dedication to Politics. When he was nineteen, Beethoven wrote one of his first large-scale works, titled Cantata on the Death of the Emperor Joseph II. The piece was based on Emperor Joseph II, who was an advocate for political reform. Beethoven was a fan of many politically radical freedom fighters of his time. He was known to be fairly radical himself; Beethoven would refuse to tip his hat to royalty.

Writing for a Different Audience. Beethoven particularly disliked the class separation apparent during his lifetime. He wrote his friend, Franz Wegler, saying "when the prosperity of our fatherland has improved, then my art must be directed towards the benefit of the poor. O happy moment, and how lucky I consider myself that I can contribute to this aim, that I myself can bring it to pass!"

Changing His Mind. Beethoven originally supported Napoleon as an Enlightenment leader and freedom fighter, and devoted his third symphony to him. But when Napoleon declared himself an emperor of France, Beethoven became so enraged that he immediately went to the symphony and scraped a hole into the paper where Napoleon's name was. He wrote to his friend about the matter, saying, "So he too is nothing more than an ordinary man. Now he will trample on all human rights and indulge only his own ambition. He will place himself above everyone and become a tyrant." History goes on to show just how right Beethoven was.

When Beethoven was a young boy, he played violin. He preferred playing improvisationally to reading music, but his father would tell him to quit that scratching, and that it would never amount to anything.

Beethoven was appointed as a court organist in Vienna, Austria when he was fourteen years old.

Since he created music over the course of his entire life, there are actually three separate groups of compositions that are considered different periods of Beethoven's music.

He had an impulsive nature that often caused him to overreact to social situations. Often he would make an honorable apology afterwards and was forgiven by the aristocrats of Vienna.