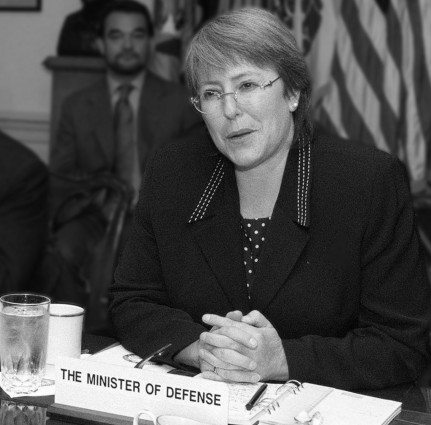 First Executive Director of the United Nations Entity for Gender Equality and the Empowerment of Women. She dedicated her UN work to increasing women's political participation and economic opportunities, as well as ending violence against women.

Governments Can Do Good. Bachelet is a firm believer of government separate from religion. She has said, "I'm
agnostic. . . I believe in the state. I believe the state has an important role in guaranteeing the diversity of men and women in Chile — their different spiritualities, philosophies and ways of life."

Equality, Dignity, and Justice. As a leader, Bachelet speaks out for the rights of all, and tends to voice her humanist tendencies. She has said, "In my family I learned that all people should be equal in opportunities, and that justice was essential, dignity was essential. So it is in my DNA to believe in people's rights, and to believe we are all different, and
that is great because that makes this world more interesting."

Empowering the Whole population. One of Bachelet's main goals is the empowerment of women in Chile and
the world. She said, "Gender equality will only be reached if we are able to empower women."

Her father, a general in the Chilean Air Force, was arrested and tortured when the Chilean government was overthrown. He eventually died of a heart attack while detained. Bachelet and her mother, an archaeologist, were also tortured and held in detention centers until they were expelled from Chile in 1975. In 1979, Bachelet returned to Chile and completed her medical degree.

In high school, Bachelet formed a music band called "Las Clap Clap." She was also on the volleyball team.

Though enormously popular at the end of her presidency, most presidents only run for one term in Chile. However, Bachelet is the first two-time president of Chile since the end of Pinochet's rule, over half a century ago. In 2014, she was reelected to office for a second term in by a margin of 62% – 38%

Ranked 25th most powerful woman in the world by Forbes magazine in 2014.