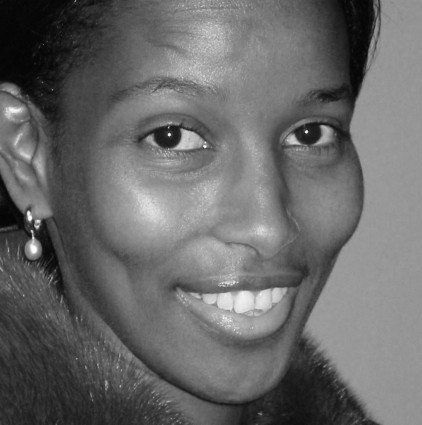 Chief Accomplishment:
Activist for women’s rights and critic of Islam.

Earned an MA in political science from Leiden University, The Netherlands.

Served as a member of the Dutch parliament where she focused on integration of non-Western immigrants and defending the rights of Muslim women.

Author of The Caged Virgin: An Emancipation Proclamation for Women and Islam and two autobiographical memoirs, Infidel and Nomad: From Islam to America: A Personal Journey Through the Clash of Civilizations.

Fellow with the Future of Diplomacy Project at the Belfer Center for Science and International Affairs at Harvard Kennedy School.

Became a fellow with the American Enterprise Institute in Washington, DC.

Founded the Ayaan Hirsi Ali Foundation to help protect and defend the rights of women in the U.S. from religious and cultural oppression. The AHA Foundation focuses on issues around violence against women and girls including honor violence, forced marriage and female genital mutilation.

From Muslim to Atheist. Hirsi Ali was raised Muslim and identified as a devoted believer until adulthood, though she always experienced doubts about the roles of men and women. The events of September 11th disillusioned Hirsi Ali to Islam, which she came to believe to be responsible for the attacks. In 2002, Hirsi Ali read The Atheist Manifesto by Leiden philosopher Herman Philipse. The book deeply influenced her and gave her strength to denounce Islam and acknowledge her disbelief in God.

Break the Silence. As an advocate of speaking out against injustice, Hirsi Ali has said “Some things must be said, and there are times when silence becomes an accomplice to injustice.” She goes on to say,“Tolerance of intolerance is cowardice.”

Won’t Back Down. Hirsi Ali produced Submission with director Theo van Gogh, a film about the oppression of women in conservative Islamic cultures. The filmed aired on Dutch television and both Hirsi Ali and van Gogh received death threats. In broad daylight, van Gogh was brutally murdered on an Amsterdam street: he was shot and stabbed, the knife left pinning a letter to his chest addressed to Hirsi Ali, threatening her and all other nonbelievers. Hirsi Ali continues to be a constant target of Islamic extremists. She lives with round-the-clock security, but doesn’t give up on her cause.

Hirsi Ali was subjected to female genital mutilation when she was five years old.

When she was 23, Hirsi Ali fled to the Netherlands after being forced into an arranged marriage with a Canadian cousin.

Though Hirsi Ali’s experiences of patriarchal oppression and violence undoubtedly reflect the realities of the tradition as it is practiced in some communities, critics say Hirsi Ali ignores or dismisses less extreme experiences of other Muslims as well as contemporary movements towards progressive reform.

In 2006, the Dutch minister for immigration revoked Hirsi Ali’s citizenship for misrepresenting her birth date and changing her last name. She claims she lied because she feared her ex-husband and family locating her. After fierce Parliamentary debate, the immigration decision was reversed. Hirsi Ali moved to the United States later that year.