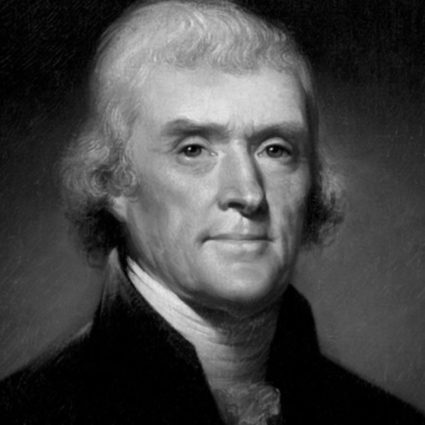 Chief Accomplishment:
The third president of the United States and one of the creators of the Constitution.

Primary author of the Declaration of Independence.

One of the first members of an elected legislature in the country as a member of the Virginia House of Burgesses.

Wrote several books including Speeches that Changed the World and the Autobiography of Thomas Jefferson.

Founded the University of Virginia.

Giving Good Advice. In a letter to his nephew Peter Carr, Jefferson wrote, “Fix reason firmly in her seat, and call to her tribunal every fact, every opinion.” He wanted to let his nephew know that all claims should be assessed using reason. He even explicitly extended this more by questioning religious belief, going on to say: “Question with boldness even the existence of a god; because if there be one he must approve of the homage of reason more than that of blindfolded fear.”

The Jefferson Bible. Jefferson was considered a deist, believing that god set the universe in motion, but doesn’t intervene. Jefferson believed in the teachings of Jesus, but thought that the accounts in the gospels were untrustworthy. So Jefferson took a sharp object to the New Testament, cutting out all the miracles and fantastical parts, and created his own version. He called his new Bible The Life and Morals of Jesus of Nazareth. After his death, it was published and called The Jefferson Bible.

Jefferson’s favorite hobby was reading and he amassed quite a collection of books over his life. During the War of 1812, British forces burned the Library of Congress to the ground. Jefferson said “I learn from the newspapers that the vandalism of our enemy has triumphed at Washington over science as well as the arts, by the destruction of the public library with the noble edifice in which it was deposited.” In response, Jefferson sold his collection, totaling around 6,487 volumes, to the Library of Congress. Jefferson said he was planning on making his library public upon his death anyway, and that getting new books from Europe would prove difficult.

Jefferson had an ear for music as well as politics. When he was young he learned to play the violin, and kept up the hobby even when traveling. He had a special fiddle created that could be strapped to his saddle. Music even brought him together with his wife, who was also a musician.

Another of Jefferson’s favorite hobbies was stargazing. Jefferson loved cataloging different planets and star formations. His telescope of choice was a Dollond telescope.

Quite the handyman, Jefferson designed his plantation home, Monticello, himself. Monticello means “little mountain” in Italian. He also helped design the University of Virginia.