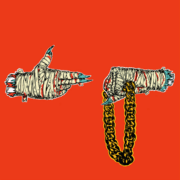 I’ve been a fan of Run the Jewels for a while now, and they just put out their third album, Run the Jewels 3, at the end of last year in a semi-suprise manner. RTJ3 is really good, but for today’s Music Monday we are taking a trip back to 2014 to their widely acclaimed Run the Jewels 2 release. The politically charged hip-hop duo often take aim at power structures, and in “Angel Duster” the target is religion and religious structures.