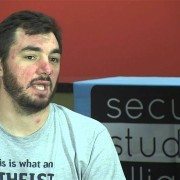 Dan is a Regional Campus Organizer for the Secular Student Alliance, an Atheist, and Openly Secular! He wasn’t raised in a specific religion, but became a Christian when attending a youth group with a friend. He became very serious about his faith, but was intellectually honest in his pursuit of knowledge. He says that he picked up Richard Dawkins’ book “The Blind Watchmaker” as a Christian, and put it down an Atheist.