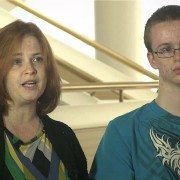 Gwen and James share their experiences of being Openly Secular!

James is a student in a conservative school, who is the son of a pastor. He feels that he has suffered some discrimination at his school because of his beliefs.

Gwen was raised in a very religious home and was a very devout Christian for much of her life, including being a pastor’s wife. She began questioning her faith after running a struggling bookstore.