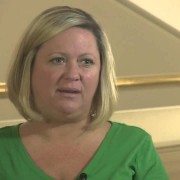 Jennifer is the president of the Carolina Secular Association, a podcaster, and is Openly Secular! She realized that she was an atheist while she was serving in the military. She describes the discovery that she didn’t believe in a god and didn’t have to as such a “freeing experience” that she wanted to tell everybody! When she was on the news because of a billboard campaign she participated in, she was subjected to hate mail and threats against her family. However, she says, the threats just made her more vocal about her atheism.