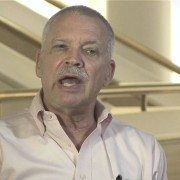 Steven raised as a Methodist, and did not really dig into his beliefs until he retired. Once he had the time to research, he was exposed to books by Sam Harris, Richard Dawkins, and Daniel Dennett, which helped him figure his questions out. Steve is a gay man who hopes to help secularists be open about their beliefs, the same way that he hopes people can be open about their sexuality. He is a humanist and is Openly Secular!