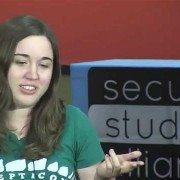 Although Lauren is absolutely ambivalent about labels, even she will admit she’s Openly Secular! It wasn’t until college when she became an Atheist activist and she is now the co-founder of Skepticon. She admits that there is still sometimes fear when admitting to being an Atheist, but she also realizes that it is her duty and to not live Openly Secular would be an injustice to the community she is a part of.