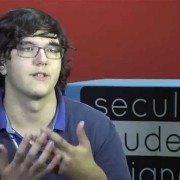 Michael was raised with a Catholic father and a secular mother. Even though he chose Catholicism initially, after coming to America from Germany and attending a Catholic high school, he realized his beliefs were not compatible with his reality. He is a student at University of Alabama Birmingham and is Openly Secular!