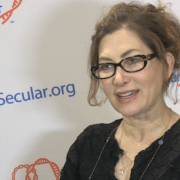 Bestselling author and actress Annabelle Gurwitch used to hold mystical beliefs about God, but when her son was born with a serious congenital birth defect, she found herself rethinking many of her assumptions about the nature of reality. Today Gurwitch is a nonbeliever, she identifies as a caffeine addicted secular humanist Jewish mother, and she is lending her witty and insightful voice to the Openly Secular campaign.

In a new video for Openly Secular, a program led by the Center for Inquiry, Gurwitch admits to having once held some nonspecific ideas about a personal God who looked out for her. She says, “I was one of those ‘universe girls’” who believed that some spiritual force was guiding her and affecting her life and helping her find parking spaces.

But when her son was born with VACTERL, a collection of congenital birth defects, assurances that “God doesn’t give you more than you can handle” weren’t cutting it. This disconnect helped her to “reset” her thinking. “That just took the God right out of my life,” she says.

For Gurwitch, leaving religion raises the stakes for living a moral, ethical life. “Being secular people holds us to a responsibility to our community and to our planet that I feel is an extremely honorable way of living.” She hopes that in adding her voice to the Openly Secular campaign, more secular Americans will realize that they are not alone.

And one of the best parts about abandoning magical thinking? Gurwitch quips, “I spend a lot less money on crystals.”

Annabelle Gurwitch is a bestselling author of books such as I See You Made an Effort: Compliments, Indignities, and Survival Stories from the Edge of 50, as well as a respected performer and commentator, having spent six years as host of TBS’s Dinner and a Movie, and appearing on programs such as Dexter, Seinfeld, Boston Legal, and Real Time with Bill Maher. She has written for publications such as The New Yorker Magazine, The New York Times, and The Los Angeles Times. To read her thoughts on secular humanist groups that are trying to take the place of religions and how she was once in a new age UFO cult, you’ll have to pick up her next collection of essays, Wherever You Go, There They Are (Penguin, April 2017).

Openly Secular is a campaign of the the Center for Inquiry, designed to eliminate discrimination and increase acceptance of atheists, freethinkers, agnostics, humanists, and other nonreligious people by encouraging secular people to be open about their beliefs. Celebrities who have spoken on behalf of the campaign include NFL stars Arian Foster and Chris Kluwe, former congressman Barney Frank, actress Julia Sweeney, rapper Killah Priest, actor John de Lancie, and entertainer John Davidson.

Music Monday: Hozier – “Take me to Church”
Scroll to top