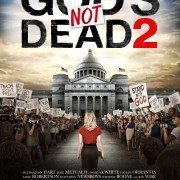 It is no secret that God’s Not Dead 2, released last Friday by Pure Flix Entertainment, has an agenda. This movie wants to show a Christian standing up for her faith against an atheist establishment that wants nothing more than to suppress her right to believe as she chooses. Much has been said by others about the contortions the scriptwriters must resort to in order to make this movie, with paper-thin strawman characters, “evil atheists” who look nothing like the millions of secular people who just want to live their lives free of discrimination and intolerance.

Openly Secular’s own Chris Line has penned a review from his own perspective as an atheist law student, taking issue with the complete misrepresentation of the legal logic of the film. He does an excellent job breaking down just how wrong the film’s representation of the law is, as well as its completely counterfactual approach to how these cases are tried in the court of public opinion:

Being a prominent atheist involved in a landmark case trying to restrict Christian religious power makes you a target, not someone to envy. Many plaintiffs in similar cases need to be classified as John or Jane Does in order to protect their identity because Christian communities are quick to try to run atheists or religious minorities out of town when they discover that they are suing the city or the school district for supporting Christianity.

Films like God’s Not Dead 2 represent discrimination against secular people. The discrimination may not be as immediately impactful as employment, housing, or marriage discrimination, but it has long-lasting and insidious effects. It can be tempting to look at these films and laugh at the shoddy writing and obvious bias. However, he truth of the matter is that God’s Not Dead 2, and other films in the same vein, make it very easy for a believer to justify their intolerance.