Scott Prior (L) and Juan Mendez (R), two Arizona politicians who are standing up for Secular Arizonans 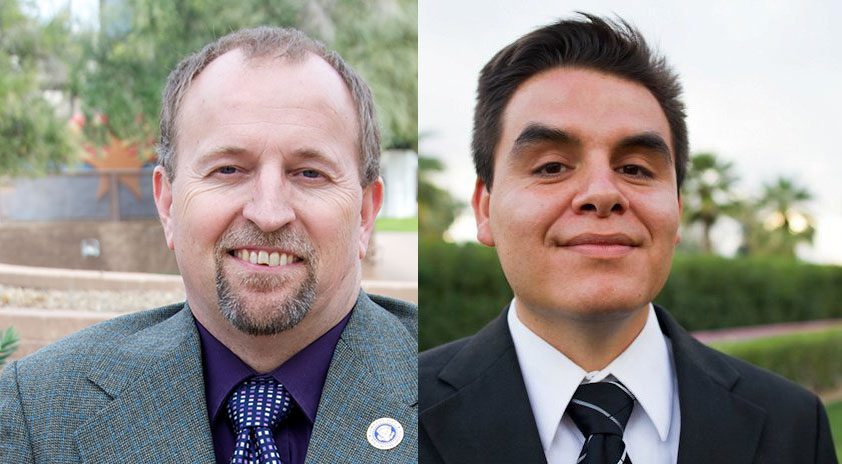 In January, the Secular Coalition of Arizona visited the state capital. Representative Juan Mendez requested to give the opening prayer while the SCA visited—attempting to offer a moment of silence instead. His request was denied by House Majority Leader Steve Montenegro. On the day of the SCA’s visit, a minister offered a prayer. However, after the prayer, Mendez did comment to the House that Arizona was incredibly diverse, and was a home to those with belief and those without. Three years prior to this debacle, when it was Representative Mendez’s turn to give the opening prayer, he caused quite a stir by urging his fellow Representatives to “not bow [their] heads” while he talked about “the extraordinary experience of being alive.”

Recently, Montenegro has instituted an unofficial policy that does not allow more secular openings to sessions. The House Majority Leader insisted in a memo released in January that the prayer given at the opening of sessions must be a prayer “as commonly understood and in the long-honored tradition of the Arizona House of Representatives, is a solemn request for guidance and help from God.” This strict definition excludes moments of silence or more secular exchanges. The prayer must be one to a “higher power.”

Despite these setbacks, all is not lost in Arizona. Early in February, candidate for Arizona State Senate Scott Prior “came out” as a show of support to his community. Prior explained that this action was a response to the misconceptions he felt many held about the secular community. At an emergency meeting of the Phoenix City Council regarding the nontheistic Satanic Temple, he encountered what he described as many inflammatory statements and much animosity. This experience, coupled with Montenegro’s policy that denies members of his community the same rights in the House as other Representatives, caused Prior to take action. He hopes to garner equality for those without a God-belief, and to destigmatize nontheists.

We at Openly Secular applaud the efforts of Representative Mendez and Mr. Prior to bring the issue of representation for secular Arizonans – and by extension all secular Americans – to light.

God’s Not Dead 2: Twisting The Facts About Discrimination
Scroll to top