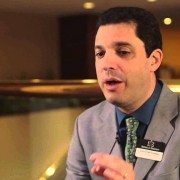 David Silverman is the President of American Atheists. He was a non-believer early on in his life despite being from a Jewish family. He recognizes the fear many Atheists have about being rejected if they come out, but emphasizes the importance of the Atheist community. He himself is an Atheist and Openly Secular!