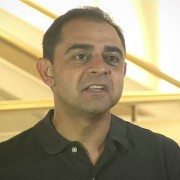 Raul is an IT project manager and is originally from Mexico. His father was a fan of Carl Sagan and Isaac Asimov, which opened the door to Humanism for him. His mother attempted to enroll him in Sunday school, which ended shortly after Raul began asking difficult questions. Raul is Openly Secular!