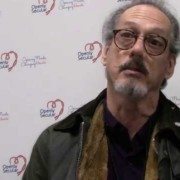 Washington DC—Author, illustrator, film concept artist and screenwriter Wayne Barlowe is world-renowned for drawing images of aliens, dinosaurs, fantasy figures and even his own bizarre rendering of hell. Despite the phantasmagorical aspect of his work, Barlowe is very much rooted in the here and now.

Barlowe recently made a video for Openly Secular, a campaign with the goal of eliminating discrimination and increasing acceptance of nonbelievers, atheists, agnostics, humanists and freethinkers, by encouraging secular people to be open about their beliefs. Barlowe is one of the hundreds of people, including numerous celebrities, who have made videos declaring themselves “openly secular” within the past year.

In his video, Barlowe says he is not religious, and that his life is guided by the Golden Rule.

“As far as I’m concerned, it’s an ethical question,” he says in the video. “You can be ethical without having to be religious. I subscribe to the Golden Rule and that pretty much sums up the way I feel people should relate to one another.”

To watch Barlowe’s Openly Secular video (featuring images of his work), please click here. To view the other videos, or to create your own, please visit www.openlysecular.org.

Barlowe is a leading artist in the science fiction and fantasy publishing and film worlds. He wrote Barlowe’s Guide to Extraterrestrials, Barlowe’s Guide to Fantasy, Barlowe’s Inferno, and The Alien Life of Wayne Barlowe, among many others books. His film design work have anchored such films as Babylon 5: The Third Space, Hellboy, Hellboy 2: The Golden Army, Harry Potter and the Prisoners of Azkaban, Harry Potter and the Goblet of Fire, Avatar, and Pacific Rim. In addition, Alien Planet, a Discovery Channel program based on Barlowe’s book Expedition, aired in 2005.

As Director James Cameron once said, “Wayne Barlowe designs the trippiest aliens out there.” And we can fairly say, he has designed the trippiest Openly Secular video as well!