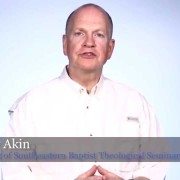 Evangelical Christians and secular people are not typically known for sticking up for each other. Most would not expect evangelicals to speak out in support of a campaign like Openly Secular, with its mission to eliminate discrimination and increase acceptance by getting secular people to be open about their beliefs.

So why has Dr. Danny Akin, one of the most prominent leaders in the Baptist Church, made a video for Openly Secular, supporting the campaign's mission? After all, Akin, as president of the Southeastern Baptist Theological Seminary, which is affiliated with the Southern Baptist Convention, represents a constituency that often publicly differs with atheists, agnostics and humanists. It comes down to respect. As Akin explains in the video:

"We also believe that all people are valuable and have dignity and worth, and therefore, all people should be respected and should be allowed to express their beliefs openly, according to the dictates of their conscience."

"I find it highly encouraging when Baptists and atheists speak out in support of one another," says Stiefel. "Secular people and evangelicals alike should treat each other with love and kindness. We certainly disagree on some issues, but we have more in common than many realize—including respect for and acceptance of our fellow human beings, no matter their belief system. We look forward to welcoming more theist allies like Dr. Akin to join us in our mission to eliminate this insidious form of discrimination and bigotry."

You can view Akin's video at youtu.be/7WJ-T2ZWGzk.