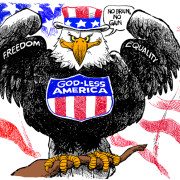 Recently, two studies have been released that affirm the number of nonreligious Americans is rising. For several years, the percentage of secular Americans has been increasing rapidly and the media has been reporting on it. But dig a little deeper, and it becomes abundantly clear that this new data is fundamentally different and demonstrates a significant shift in the hearts and mind of American citizens, and critically, American voters.

These new studies, one conducted by the Pew Research Center on Religion & Public Life, the other by the Public Religion Research Institute (PRRI) reveal that not only are the aggregate number of religiously unaffiliated Americans (often called "nones") rising, but that the ranks of those who self-identify as atheists and agnostics are growing at a dramatic pace. At the same time, the number of Americans who identify as Christians is shrinking.

Since 1993, the percentage of Americans who claim no formal religious affiliation has grown from 9% to 22% according to the PRRI study. No other group has risen as sharply. According to the Pew Research Center study, released on May 12, the percentage of these "nones" in the United States is even higher, 23%, and represents 56 million Americans—compared to 26 million in 2007, making the "nones" the second-largest cohort, behind only evangelical Christians.

This trend toward secularism in America will only continue to grow. According to the Pew study, the religiously unaffiliated Americans skew younger, as a robust 36% of Americans 18-24 self-identify as "nones" (incidentally, the exact same figure as all Protestants in the United States.) And only 19 % of these "Younger Millennials" are evangelicals. Conversely, of those 69 and older, just 11% are unaffiliated, while 30% say they are evangelicals.

"These figures are important, because this generational gap is only going to grow wider," says Openly Secular chair Todd Stiefel. "In fact, if these trends hold until 2028, the largest group of Americans, in terms of religious identification, will be the "nones." (See chart, below). This is huge on a couple fronts. First, as the influence of the religious right decreases, it means more and more policy decisions will be based on moderate American values rather than fundamentalist conservative values. It also means issues like marriage equality will be decided based on reason and love, rather than conservative religious discrimination. Hopefully, in 14 years, acceptance of and tolerance towards nonbelievers and believers alike will not be something we still need to fight for—it will be a given."

Not only is the overall number of unaffiliated Americans surging, a greater proportion of these "nones" are identifying as secular, and not just unaffiliated with a particular religious group. The Pew study shows that 31% of the "nones"—representing 17 million Americans—self identify as atheist or agnostic, up from 25% in 2007. An additional 39% of the "nones" say that religion is not important to them. Which means, 15.8% of the total population of the United States is atheist, agnostic or secular.

Wow. Sixteen percent of potential voters carries a lot of political clout. A group of voters this large, which believe in the separation of church and state, and that religion should not be a factor in policymaking, simply cannot be ignored. It also means that religious right politicians like 2016 Republican presidential nominee Mike Huckabee, who frequently and proudly demonizes the millions of Americans who do not believe in God, will be further marginalized.

"This data is particularly meaningful as the 2016 presidential election approaches," says Stiefel. "For one, for the first time, politicians will not be able to ignore the substantial voting bloc of secular Americans. We have real clout and we vote. As the number of secular people continues to rise, more and more Americans will come to realize that many of their loved ones, next-door neighbors and coworkers do not believe in God, and that they are still moral, good people."